Twins Try to Climb Highest Mountain in All 196 Countries » Explorersweb 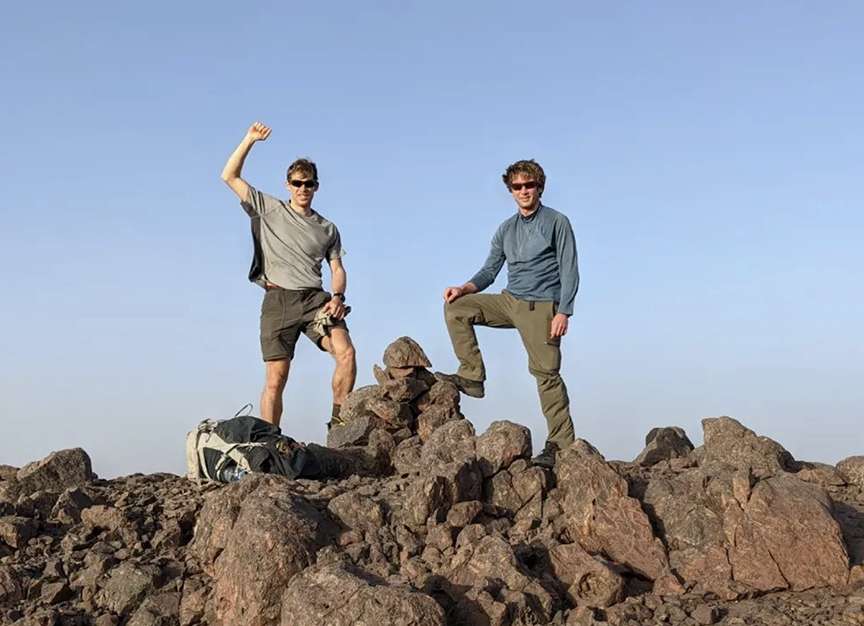 As mountaineers continue to seek new ways of getting their names in the history books, the goals become increasingly audacious.

So it goes with two twins — both with PhDs in mechanical engineering from MIT — who have set their sights on climbing the highest mountain in every country.

As climbing projects go, this one sounds implausible, yet Eric and Matthew Gilbertson have already made it more than halfway to their goal. However, it seems that Eric Gilbertson may now be forging on alone.

A week ago, Eric posted on Instagram that he had reached the summit of K2 — with climbing partner Andreas Frydensberg. This was Eric’s 131st peak. His twin and most common partner, Matthew, has 97.

Eric now climbed one of the most dangerous mountains in the world. Even more impressive, he didn’t use supplemental oxygen on K2. Yet Eric called it only the fourth-most-difficult mountain on his journey so far.

“Pobeda, the Kyrgyzstan highpoint we climbed last summer, was actually much more difficult,” he wrote on Instagram. “I would say K2 is the fourth hardest. Hardest in decreasing order are likely Bhutan, Myanmar, Kyrgyzstan, Pakistan.”

Years in the making

According to their website, CountryHighPoints.com, their love of climbing started with family trips to the Big Smoky Mountains when they were children.

By 2012, the dynamic duo had climbed the highpoint of all 50 U.S. states, which took them 15 years. “The next logical step,” they wrote, was to work on the highpoints of every country.

By then, they’d already started climbing the highest mountain in all 23 countries in North America. They finished on Cuba’s Pico Turquino in 2015 after just over five years.

Eric has also climbed the highpoints of all the countries in Europe, including Denmark and the UK, after six years and 28 days. The duo mostly climbed the mountains as part of long-distance bicycle tours.

While the expenses of such an undertaking should be massive, the twins say that focusing on frugality has allowed them to be so successful.

Traveling on the cheap

“We try to live in the cheapest apartment, don’t eat out often, and repair our own gear,” the Gilbersons wrote. “We sign up for airline credit cards to get free flights, go on long bicycle tours to avoid paying for ground transportation, and if at all possible never pay to sleep.”

As professional engineers, they often travel internationally to present their research at conferences, allowing increased opportunities for climbing.

“So if we made good progress on our research, we could present our work in Brazil or China or Germany, and climb some mountains on the side,” they said.

They also don’t pay for guides unless required by law. Thanks to the MIT Outing Club, they learned many of the skills they needed to climb big mountains like Denali and K2.

However, many challenges remain for the Gilbertsons to complete their goal. As one YouTube interview pointed out, there are several big question marks, such as countries at war or those simply off-limits to outsiders.

At this point, it’s possible that Eric Gilbertson may complete the goal all on his own. We’ve reached out to them to ask why Matthew has stepped back of late.

“No one has ever reached the highest point of every country in the world. Will anyone ever? I’m not so sure,” YouTuber Mikey Friedland wrote in the description for the above video. “But if there’s anyone that has a legitimate chance, it is Eric Gilbertson.”