This exotic course might have the world’s best par-5s. The challenge is getting there

As golf stories go, this one had a whiff of fable.

In a lonely swatch of central Nepal, in the shadow of the Himalayas, a self-taught architect had designed a course that experts deemed worthy of the World Top 100.

No less of an authority than Tom Doak had assigned it an “11” on his personal rating scale, which goes only from 1 to 10.

A skeptic by nature, I had my doubts when I first heard the rave reviews some years ago. I would need to see this course for myself.

Last month, I finally did.

Getting to the Himalayan Golf Course requires some effort, pretty much no matter where you start. I live in Los Angeles, but my work as a technologist often takes me to India. In advance of a recent trip, I added a few days to my itinerary. From Coimbatore, the bustling metropolis where I’d been doing business, I flew to Mumbai and overnighted at an airport hotel, where a lavish Indian wedding party was unfolding in the lobby. Sidestepping the revelers and the marigold petals, I made it to my room to catch a few hours of shuteye before puddle-jumping to the Nepali capital of Kathmandu, and then on to Pokhara, the country’s second-most populous city.

Mention Nepal, and many people picture rugged basecamps, the snowy springboards for assaults on Everest. Pokhara isn’t like that. Though towering peaks ring the horizon, the elevation is a modest 2,600 feet and the climate subtropical. I arrived in the early evening, in the heart of monsoon season, and settled in at a modest place in town. When I woke the next morning, I learned that it had rained three inches overnight. More was expected. The weather app on my phone called for a 100 percent chance of precipitation, with lightning at 3 p.m., the time I hoped to play.

Known as the gateway to the Himalayas, Pokhara occupies an historically significant location, along an ancient trade route between India and China. It also is home to a large contingent of Gurkha soldiers, elite recruits who have long served in the Nepali, Indian and British armies, as well as in UN peacekeeping missions. It was a Gurkha soldier-turned-British officer, Major Ram Gurung, who designed and built the Himalayan Golf Course in the 1990s, in what was once an undeveloped river valley.

The property sits about 30 minutes outside of town if you’re traveling by taxi and your taxi driver does not get lost. Mine did, stopping three times to ask shepherds for directions. The landscape was pastoral, lush and rolling. Eventually, we came upon a guardhouse, which I recognized from a YouTube video I’d seen about the course. I asked my driver to turn in.

A uniformed guard saluted as we rolled by. We rumbled down a rutted road flanked by the husks of half-completed buildings, the vestiges of an unopened resort, and parked at the clubhouse, a boxy cinderblock structure that backed up to a patio where six men were sitting, the course stretched out behind them.

One of the men was Bhuwan Gurung, an affable 47-year-old who is not to be confused with the course designer, Major Gurung. Bhuwan works as the property’s general manager.

Weeks before my visit, I’d tried emailing and calling the course to let them know that I was coming. I’d gotten no reply. But a colleague in India had reached out on my behalf, and Bhuwan was expecting me.

I prefer to travel light and had left my sticks at home. But I’d brought a pair of golf shoes, a few balls and a handful of tees, all of which I planned to leave behind as donations. When Bhuwan told me how precious a commodity tees are at the club, I kicked myself for not bringing dozens more.

When Bhuwan told me how precious a commodity tees are at the club, I kicked myself for not bringing dozens more.

As for loaner clubs, the options did not include the latest and greatest. But they weren’t bad, either: a Nike driver of reasonably recent vintage, and a set of Titleist cavity-back irons. I paid my greens fee of roughly $50, plus another $10 for the rentals, and off I went with my caddie, a soft-spoken local, to peg it with Bhuwan in a three-ball. Our third was a young man named Raj, who’d grown up in the area and gone on to work at LinkedIn in the Silicon Valley before returning home to be close to family.

World-class courses often open humbly, easing you into the round. The Himalayan follows that blueprint. Its first two holes are unremarkable. But the third tee brings one of the game’s most arresting reveals: a panorama of the vast, river-spliced valley through which much of the routing spills.

I could spend endless superlatives on the Himalayan, but I’ll start with this. In a ranking of courses with the best collection of par-5s in the world, I’d nominate Pebble Beach and Augusta National as top contenders. And I’d put the Himalayan above them both.

There are three on the scorecard, beginning with the 550-yard 6th, which has an Insta-ready island green, fronted by a series of peculiar-shaped pot bunkers. Fair or not, the tee shot from the tips requires a 200-plus-yard carry across the river, up the right. That’s the safe play. The Tiger line is up the left, yielding a clearer angle into the green. I like to pick my targets from the tee on the horizon, and in this case, snow-covered Annapurna did the trick, its 26,000-plus-foot summit splitting the clouds.

If the 6th is adrenaline and exhilaration, the par-5 10th is understatement of the old-school kind, with echoes of St. Andrews in a tee shot that calls for a centerline decision through rough-covered hummocks some 250 yards away. The 15th, the last of the par-5s, is not the least. At 515 yards, it bends left and rises over a saddle, leading you up and out of the canyon to a green set on a ledge, overlooking the valley you have just traversed. The afternoon we played it, a small herd of sheep trailed just behind us. Cows grazed in the distance. Goats were somewhere out there, too.

Livestock do more than spectate at the Himalayan. As at Brora, the course has wire fences around its greens to guard against ruminants. Machine maintenance is minimal. The fairways are unirrigated. The grounds crew relies on a single mower, a gift from the R&A. During the dry season, the course plays firm, with ample rollouts in the fairways. On my visit, the grounds were soft, but shots didn’t plug. They landed with a gentle bounce.

As one of just two groups on the course that day, our pace was brisk, and the company was everything I could have asked for. Bhuwan is a golf junkie of the best kind, passionate about the game but not overbearing with his opinions on it. With Raj pitching in as a translator, he shared bits and pieces about his background. Bhuwan had been to the Old Course at St Andrews, a bucket-list trip, and competed now and then on the South Asian circuit. In his spare time, he’s been working on a course near the Tibetan border that, when it’s completed, will be the highest-elevation layout in the world. I’d place his handicap at a plus-3.

The weather forecast was only partly right. Precipitation fell, but it didn’t come in torrents, and lighting never flashed. The rain was warm and pleasant. It barely drew my notice.

More attention-grabbing was the water in the river, which raged with mountain runoff. I’ve seen calmer currents on Class-5 rafting trips. The Himalayan’s routing works back and forth over the river, requiring six or seven treks across makeshift footbridges. Looking at the river frothing just below, I tried not to think of what would happen if I slipped.

Looking at the river frothing just below, I tried not to think of what would happen if I slipped. 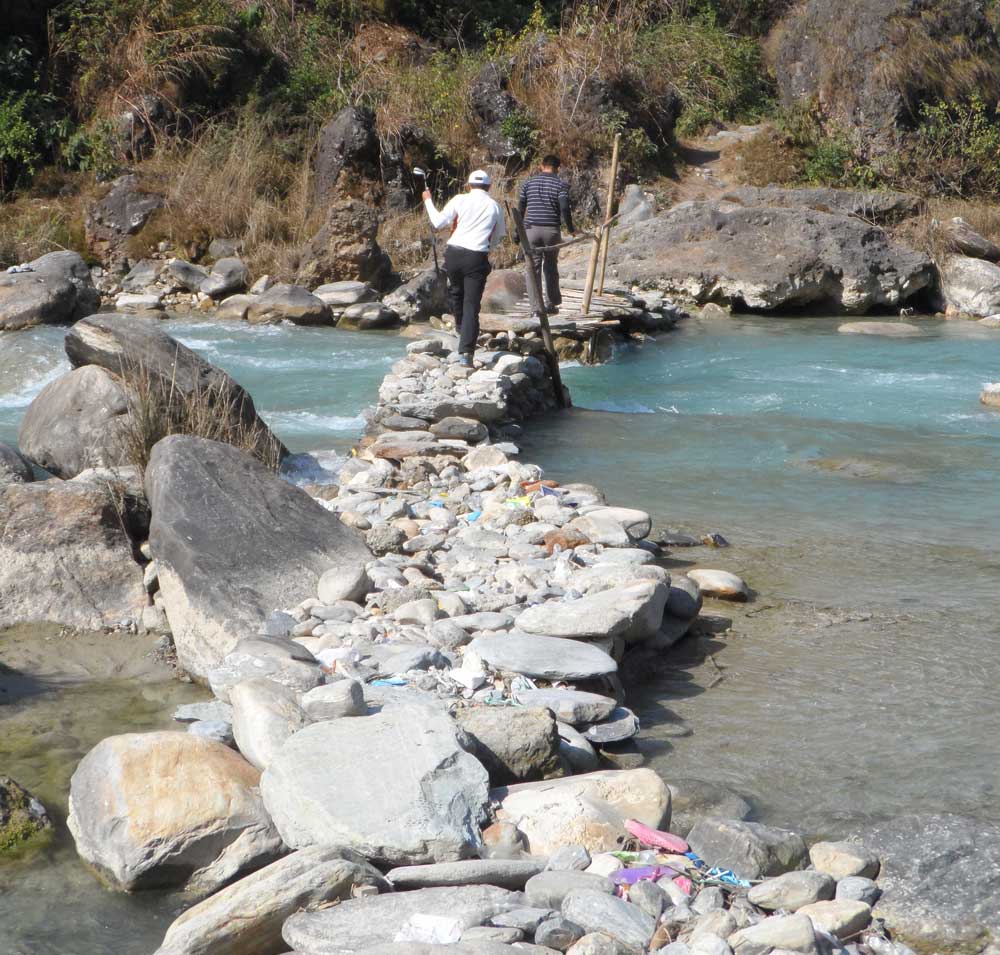 Twilight was approaching as we putted out on 18. We returned to soak in the view over beers and bowls of noodles. Along the fairway of the 3rd hole, runway towers have been erected, early signs of construction on what will someday be an international airport, the sort of project whose scale and timing is sure to be decided in the corridors of government power. When it will be completed and how it might affect the course, I cannot say. Maybe Bhuwan knows. It didn’t feel it was my place to ask.

Instead, we chatted idly, sipped our suds, and ate. The sun dipped low. My taxi was waiting. I bid farewell to my playing partners and headed off on a long trip home.

Does the Himalayan Golf Course belong in the World Top 100? I could get behind that.

But aside from architecture, we could probably use a metric that measures inspiration. On a scale of 1 to 10, I’d give it an 11.

Tom Brown is a technologist and a GOLF Magazine Top 100 panelist.