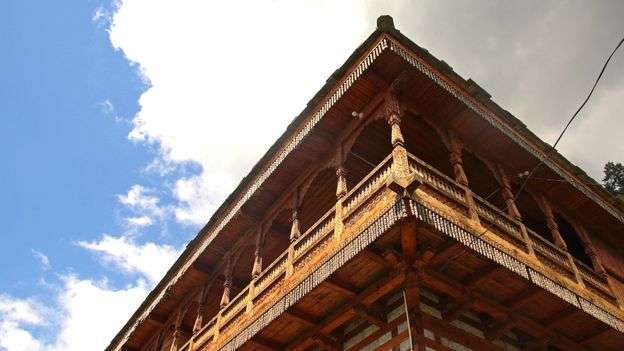 In 1905, a deadly earthquake rocked the landscape of Himachal Pradesh, an Indian state in the western Himalayas. Sturdy-looking concrete constructions toppled like houses of cards. The only surviving structures were in towns where the residents had used an ancient, traditional Himalayan building technique known as kath kuni.

On a warm Tuesday afternoon, I was headed towards one of them: Naggar Castle, which was built more than 500 years ago as the seat of the region’s powerful Kullu kings, and which remained standing, unscathed, after that calamity.

Officers from the Geological Survey of India were amazed by the lack of seismic damage to the castle and other kath kuni homes in the earthquake’s radius. “This, at first sight, appeared unnatural on account of the apparently rather top-heavy construction of the houses… until one came to realise the natural resisting power of their timber-bonded walls,” they wrote.

The castle is one of the most exquisite remaining examples of the building style, but kath kuni houses have been constructed in this region for thousands of years. The design is recognisable by its layered interlocking of deodar wood (a type of Himalayan cedar) with locally sourced stone, without the use of mortar. Naggar Castle is now a hotel and tourist attraction, but its rustic walls – flat-stacked grey stones alternating with earth-toned planks of wood – are proof that some things are timeless.

As a design, kath kuni is ingenious. “Deodar wood and stone create a spectacular balance and composition together,” said Rahul Bhushan, architect and founder at NORTH, a Naggar-based architecture and design studio working to preserve the building technique through construction projects, workshops, artist residencies and homestays. “Stone gives weight to the structure, resulting in a low centre of gravity, and wood holds the structure together, thanks to its flexibility.”