The snow and rain ceased in Nepal’s mountains last weekend, speeding up the work of fixing teams on Ama Dablam. The beautiful peak has already seen a few summits, including three today.

The tragic news this season relates to trekking groups. The floods and landslides in northern India, in which several trekkers and many locals died, have also affected Nepal. Authorities have closed some of the country’s most popular mountain regions. And another casualty was reported late last week near Makalu Base Camp.

Last weekend, climbing teams flocked to Ama Dablam, as the skies finally cleared. The “Mother’s Necklace” was particularly stunning in its mantle of fresh snow, to the delight of photographers. Among them, Australian Jackson Groves. After making an impressive debut in the mountaineering world with his drone footage of Manaslu, Groves has joined Seven Summit Treks to climb and document the team’s progress on Ama Dablam.

Guide Jon Gupta is also on Ama Dablam, leading a single client. They leave for Advanced Base Camp tomorrow. Conditions are great, Gupta told ExplorersWeb. The snow that fell last week shouldn’t be a problem on Ama Dablam, he explained, “because it’s steep and excess snow sluffs off.” Many climbers on the mountain hope to reach the top Thursday and Friday.

On a sadder note, a Danish citizen died near Makalu Base Camp last Friday. His name has appeared in different spellings — Henrik T. Adderson, Adersen, Andersen. Local reports did not specify the cause of death. Local news outlets referred to it as a climbing expedition, but these were more likely trekkers. Nepal’s Department of Tourism has issued no climbing permits for Makalu this fall.

Deep snow blocked others in the 10-person group of three Danes and seven Nepalis near Base Camp. They had to be evacuated. 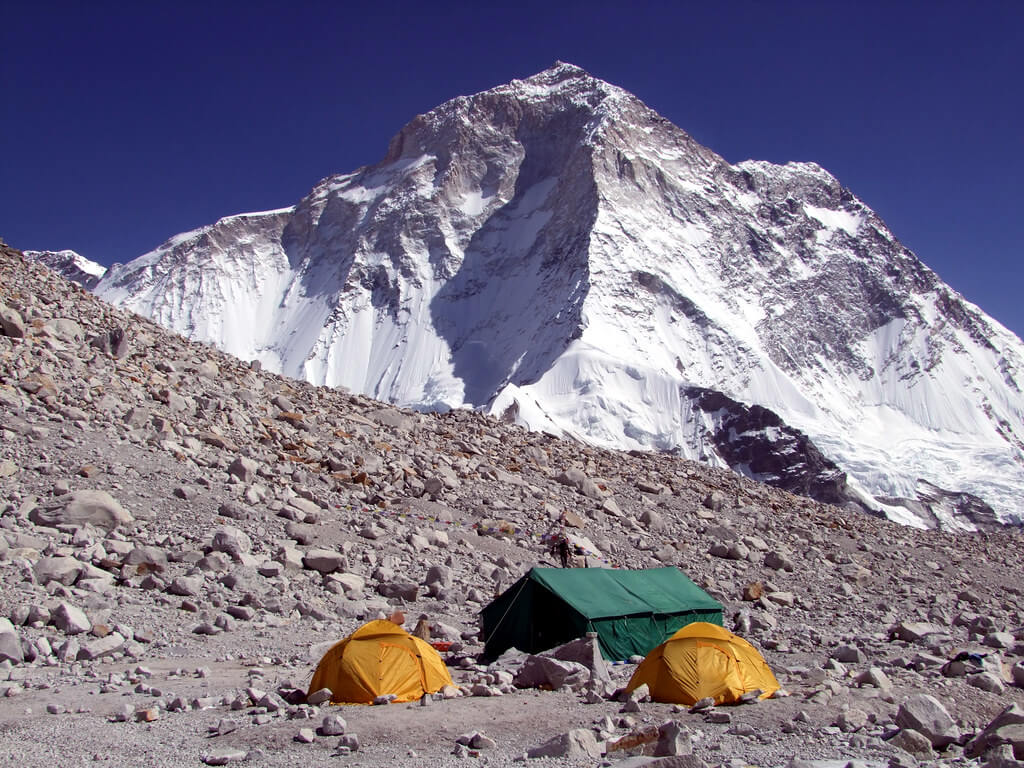 MtEverestToday mentioned that two people were evacuated from Langmale. This probably refers to Langmale Kharka, a flat camping area two days before Makalu Base Camp. Climbers follow that route, as do trekkers on the so-called Three Cols Trek.

That trek is one of the most challenging and scenic in Nepal. It traverses the Barun Valley, past Makalu into the Hinku Valley via the Sherpani Col and the West Col. It proceeds via the Amphu Lapsa Pass to Chukung, then heads down the Khumbu for a grand finale with views of Cho Oyu, Everest-Lhotse-Nuptse, Ama Dablam, and others.

Meanwhile, fewer and fewer climbers attempt Makalu in autumn. Its normal route is technical, steep, and strenuous. The avalanche risk increases after the monsoon. No one has summited Makalu in autumn for 10 years, according to The Himalayan Database. Independent climbers tend to plan their Makalu forays to coincide with big commercial expeditions where Sherpas fix the whole route. Alternative routes, such as the legendary West Pillar, are rarely achieved or even attempted.

The snow this season has particularly affected mid-mountain and lower areas, covering passes that are usually dry this time of the year. The floods and landslides killed an alarming number of people, especially in Nepal and India’s Himalayan regions.

In India, 12 trekkers died in Uttarakhand state and three others perished in Himachal Pradesh in the last week. To safeguard visitors, authorities in Himachal’s Kinnaur district, between Zanskar and the Himalaya, have banned all mountaineering and trekking.

Senior journalist, published author and communication consultant. Specialized on high-altitude mountaineering, with an interest for everything around the mountains: from economics to geopolitics. After five years exploring distant professional ranges, I returned to ExWeb BC in 2018. Feeling right at home since then!